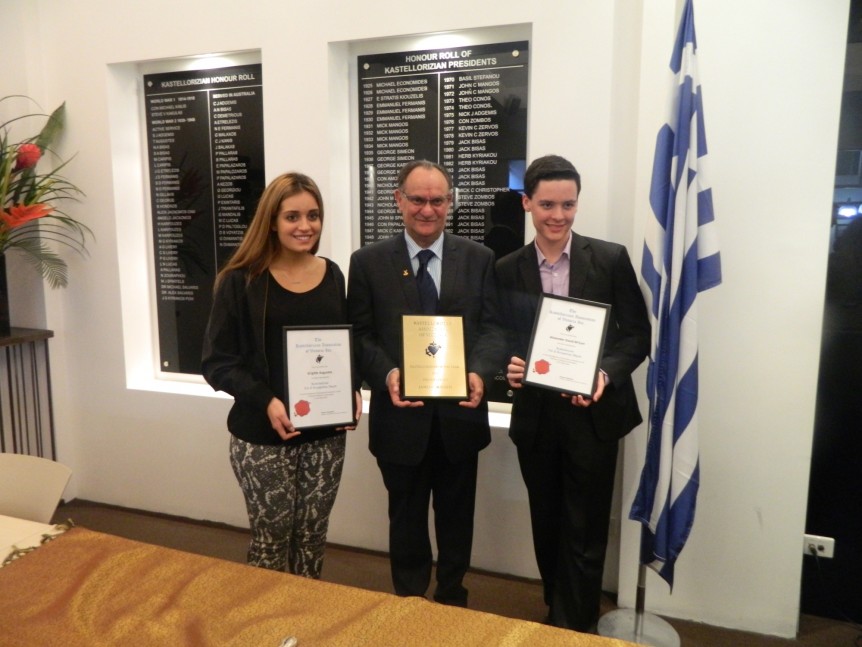 In 2014 VCE Awards were presented to : Ms. Brigette Augustes and Mr.Alex McCart

Both students completed their VCE in 2013 with outstanding results and are now pursuing further studies at Monash University. These students received a bursary to assist them with their studies and a selection of historical publications to help them appreciate their Kastellorizian heritage. Note: Photos available at the Gallery section of our website.

In 2013 a VCE Award was presented to: PAIGE ADGEMIS

A picture of Paige receiving her award can be viewed at the Gallery section of the website. Note: The middle image top row shows Paige with her parents, Nick and Lyndel, sister Lily and grandmother Betty Adgemis.
There were no nominations received for the Youth Achievement Award (KYAA)

In addition, the Kastellorizian Youth Achievement Award is presented to a person of Kastellorizian heritage, under 25 years pf age, in fields such as: completion of an apprenticeship, the arts (music, dance, theatre, film, fine arts etc), business and industry; community service; sports and education.

In 2012 the Kastellorizian Youth Achievement Award was presented to Kristen Mihalos.

Kristen worked diligently to support a variety of welfare organisations including fund raising for the Breast Council Appeal. As Prefect of her school, she demonstrated leadership and achieved success at many levels. Kristen is the daughter of Vivien and Alex Mihalos and the grand-daughter of Steve and Kristina Bisas.