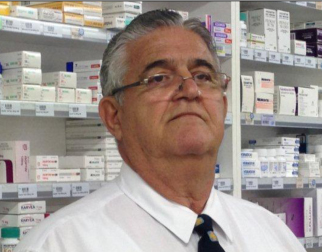 This award was conferred at the St Constantine & St. Helen’s day celebration on Sunday, May 19th at the Kastellorizian Association of Victoria’s clubrooms in South Melbourne.

A practising pharmacist from Queensland, the Committee was most impressed with Stathis’ record of community service to the Australian, Greek and Kastellorizian communities of Queensland. After relocating to Brisbane in 1956 from Innisfail in North Queensland, he began a lifetime of service.

Stathis worked within the Kastellorizian Association of Queensland for over 40 years. As President of the Association, he served several terms and when the Club faced challenging issues he stepped in to ensure that it survived and prospered. He continued to work as a Committee member up to the present time. In recognition of his services and passionate involvement he is the first person to be awarded Life Membership.

Stathis gave outstanding service to the Greek Orthodox Community of Saint George for over 45 years. He worked as a committee member for 10 years; a member of the Management Committee for 18 years, Secretary for 4 years, and President and Vice President for several years. For his outstanding services he was conferred with the award of Life Member of the Community of St. George in March 2000.

In 1991 His Eminence Archbishop Stylianos invited Stathis to become Chairperson of the St. Andrews Theological College- Bribie Island Campus; he served in this role from 1991 to 2007. An accommodation block named Kastellorizian House funded by the Kastellorizian Association of Queensland Inc. was erected at the campus in 2010.

From 1960 and early 1970’s Stathis served as a Branch President, State President and National President of GOYA. For his services he was awarded Life Membership of GOYA.