The silk scarf from Cyprus adopted and treasured by Kastellorizians.

The Tsilaniotiko, is a type of Mandili resist dyed, from Cyprus, and found in Kastellorizo. It was the dark, resist dyed cloths on which the rings at the logo were threaded. It is also used to refer to certain other types of Mandilia, which may have been the widow’s. (Information from Nick Bogiatzis).

Tsilaniotiko is a Kastellorizian word – based on the name of the village of Τζοιλάνι (Tzoilani) in Cypriot dialect, or more formally Κοιλάνι (Koilani) in the district of Limassol in Cyprus. The scarves were called Koilaniotika in Cyprus. (Information from Ioannis Constantinou).

Many Kastellorizians brought these beautiful pieces with them to Australia. They should be treated with care. Some people might even decide to frame them to preserve them. 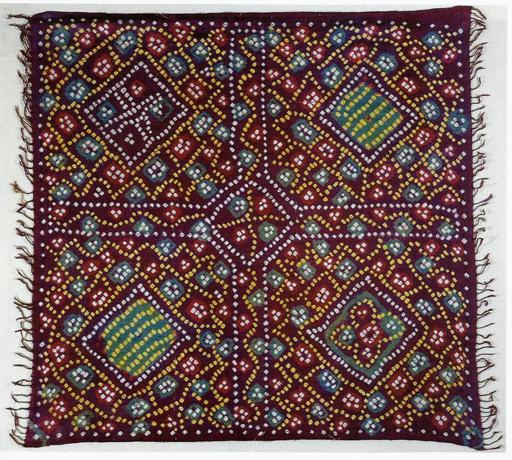 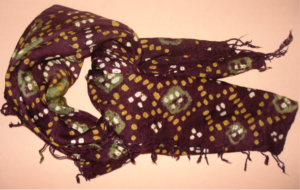 Further information has come to light from Ioannis Constantinou, who wrote to us in September, 2020, and we thank him for adding to our knowledge of the Tsilaniotiko/Koilaniotika.

He writes:
The “Koilaniotika” scarves were made with the technique of tying and dyeing and are traditional scarves of Cyprus. They were made exclusively in the village of Koilani of the district of Limassol until the early 1960’s. It is from the name of the village of Koilani that they take their name from and were made from all-silk “δίμιτο” which is a cloth woven with two threads. (Ed: Kastellorizians call this scarf the TSILANIOTIKA, – see paragraph in introduction above.)

The silk was local and mostly coloured with vegetable dyes. In the village there were craftswomen, the “shialiarenes” as they were called, who exclusively did this work. Tying and colouring the scarves required great art technique. The women usually used several different colours to make them. They had strands of fringes on their ends. A special feature of the “koilaniotika” scarves was that their designs and colours were the same on both sides. That is, a scarf did not have a good side or an “inside out” side. It could be worn on both sides. These scarves were unique, original and wonderful. The technique of tying and dyeing is an ancient technique used in the Far East. It is unknown when this technique first appeared in Cyprus and specifically at the village of Koilani which is a mountain village.

In the cities of Cyprus rich women used to wear these precious, idiosyncratic silk handkerchiefs as head scarves but also as waist scarves with their local costume. However, they were also exported ​​in large quantities to the Islands of Kastellorizo and Kasos in the Dodecanese and were worn by the women of these islands with their traditional clothing.

Today the technique of tying and dyeing for making these scarves has been lost and their existence on the island is completely unknown to most Cypriots.

The process: Litsa Augoustakis found the following from a Cypriot site on the actual process or producing the scarf: (The google translation from the Greek is rather weird, and I have abridged it and tried to make it readable – and corrected previous errors – you will get the gist of the process).

Koilaniotiko or Tsilaniotiko, – female torso scarf from silk fabric with fringed edges. It was made in the village of Koilani in Cyprus (Τζοιλάνι – Tzoilan) in Cypriot dialect) with tie-dyeing technique. A cross divided the surface into four large squares and basted with continuous red thread. Then they tied the knots that would remain unpainted and sunk the fabric in an aqueous solution of alum. They began the first painting in yellow by boiling with the fabric chrysoxylou pieces, (local wild plant species.) Then the yellow knots were tied and the next dying was red, the third blue, and of course another process to get green.   The base was dark oinerythri (kraseti) the yellow compound, red and blue. There were seven kinds of colours. The line drawings form a complex tapestry: diamonds, crosses, lines and zigzags, rosettes, all formed with dots as a result of technical knotting. Each of the four sub-blocks had a different leitmotif. These specialties were used as scarves and head scarves in the cities of Cyprus but were also exported – mainly to the Dodecanese.

Excerpt from Nick Bogiatzis’s reply to Litsa Augoustakis:
It is interesting how different cultures reinterpret artefacts from elsewhere. The mandili for the head and waist in Cyprus becomes a specific mandili in Kastellorizo for the daktilidia (rings) in the marriage arrangements. We are learning all the time.

Thanks to Nicholas Bogiatzis, Litsa Augoustakis, and more recently Ioannis Constantinou for their input.

An update on the subject of Cyprus silk production.
source: http://www.whatson-northcyprus.com/whatson/events/silk/silk.htm

Silkworms were first discovered in China, spreading to the Far East, Iran, Turkey and Cyprus. The breeding of silkworms has been part of the Cypriot culture for centuries, and until recently was a major source of income.

In the 18th century, silkworm breeders began exporting to the UK. Cyprus was renowned for producing silk which was much in demand because it was of a far higher quality, and its thread  was much more durable than others. This was an important export for the island.

A by-product from the silk spinning were the empty silk cocoons. Cypriot women would cut these cocoons into beautiful shapes and sew them onto velvet or satin cloths. As recently as the 1960s, silkworms were abundant, with many families living on the trade. Since then, however, there has been a decline in silkworm breeding, and by 2000, the trade had almost disappeared. and over the years this craft was forgotten.

Recently the Green Action Group has brought this custom back to life. Now in many towns and villages training lessons are offered in this traditional practice. The Bellapais Silk Festival’s main focus is on silk, silk worms and of course on the products made from the cocoons, such as trays, cards and pictures.

The Green Action Group, which was established in 1988, holds an annual festival in April or May, normally at Bellapais, as part of its public awareness campaign about the importance  and protection of the endemics and other flora of Cyprus in order to protect mulberry trees and revitalise silkworm growing and artwork.