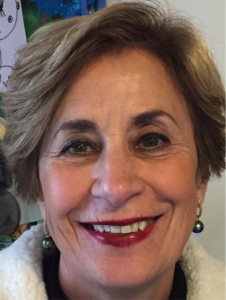 Christine Dimer, Kastellorizian of the Year 2017.

President of the Kastellorizian Seniors Citizens Club for the past decade, Christine Dimer is well-known to the Kastellerizian community for her work.

“Christine Dimer embodies ‘philotimo’ as evidenced by her many professional and volunteering roles over the years in the wider community,” said the KAV President, Dr Nick Lolatgis.

“It is reassuring to know that people like Christine are taking an active role in ensuring that the needs of the elderly and vulnerable in our wider community are properly addressed,” he added, describing the 2017 ‘Kazzie of the Year’ as somebody who “embodies the Kastellorizian ethos of ‘faith, hope and love’ both in her selfless commitment to the social welfare of our Kastellorizian seniors, and in her volunteering roles in the wider community”.

Born in Melbourne in 1949, Christine Dimer is the daughter of Steve and Ann Paltos, both coming from Kastellorizo (though Ann Mavris was born in Queensland). The youngest of three children, she studied at the Dacomb Business College and worked as a secretary, before getting married and devoting herself to raising her three children (she now has six grandchildren); in the ’80s, she started volunteering in aged care, assisting isolated elderly people which led her to get back to studying, getting an Associate Diploma of Welfare in 1995, followed by a Bachelor of Human Services in 1996, both at Monash University. Christine Dimer went on to get a position with the Association of the Blind, now trading as Vision Australia, where she worked until 2002.

Christine has been deeply involved with the Kastellorizian Association, volunteering as an Honorary Welfare worker presiding over the Kastellorizian Senior Citizens Club since 2007. At the same time, Christine Dimer started working with the Justice Department’s Office of the Public Advocate, having trained as a Community Visitor volunteering in the southern region, looking after vulnerable residents of Supported Residential Services.

“This is my most rewarding role,” she said. “After 11 years in this role, I continue to see the injustices done to our fellow human beings and feel that I can still contribute in a meaningful way to help these residents have a quality of life that is their right. I feel very privileged to have had these opportunities throughout my life. This involvement with my wider community is something I will cherish forever.”

For full details of Christine Dimer’s achievements see KazzieE-bulletin, September 2017, located in newsletter archive under the “news” button on the Kazzieclub.com website.