Please visit our gallery here for a pictorial round-up of the event.

In an event reminiscent of “how the club used to be in the old days”, a large number of Kazzies, family and friends, including numerous younger attendees, packed out the newly painted and improved-looking KAV Club rooms for this year’s Sts Constantine and Helen celebrations. We really were packed out, and in the end, it was standing room only!

A great family day: looking back and charting a course for the future.

This great family day began with a distinct buzz in the air, and a great vibe. There were many of all ages who had not seen each other, or the club, for a while or were meeting new members and friends, and were enjoying catching up and connecting.

KAV President Nik Spartels initiated the formalities by looking back on the journey that our forebears made in coming to Australia, where in the early 1900s, many were isolated. The formation of the club in 1925 created many friendships and provided social support and networking as well as a forum to just enjoy each other’s company by sharing culture and heritage. Reflecting on this last Sunday made us contemplate the benefits of bringing people together in community, which is just as important today. Nik emphasized that more than 90 years later, we are still a community club, now with an even bigger and more diverse family.

Society has evolved and Nik highlighted that now in coming together, we are not just Kazzies, however a much wider family of extended family and friends from many backgrounds. I was glad to hear this, as any community club going forward in 2018 and wishing to flourish, must keep up with changes and needs in society amongst people of all ages and backgrounds, whilst valuing diversity. This is part of retaining and promoting the Club’s underlying values, ethos and purpose of bringing people together in community and as a commitment to maintaining relevance to the very people it is supposed to serve.

Nik recognised that, at the club, many individuals have worked hard to establish and continue this tradition. Our President acknowledged the support and hard work of Florence Livery and Connie Gregory who have formed a vital part of the club and provided invaluable support for a number of presidents and committees throughout the years and these dedicated individuals were awarded beautiful flower bouquets. Recent Kastellorizian of the Year awardee, Christine Dimer, also continues to be someone the club owes much to and could not do without. 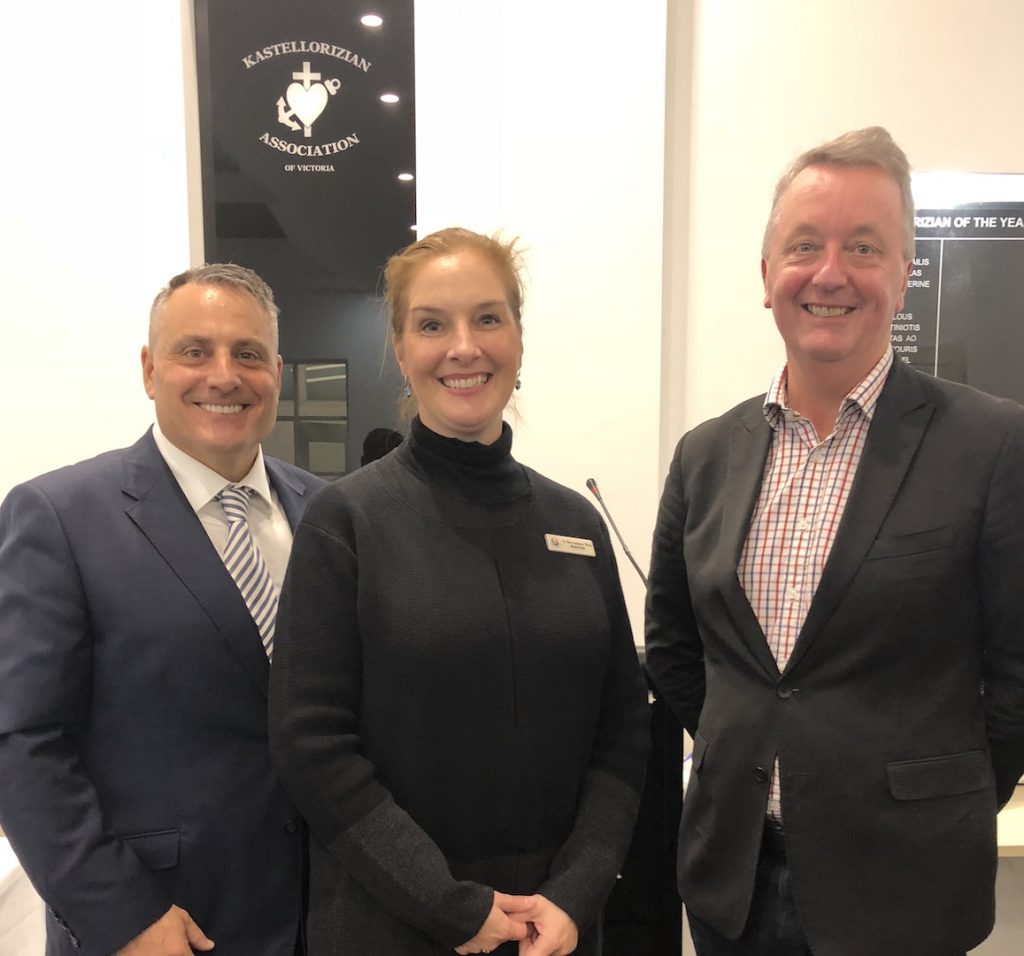 President Nik Spartels, with special guests at the event, our local member, the Hon Minister Martin Foley and Bernadene Voss, Mayor of the City of Port Phillip.

The Young achiever and VCE Awards

MC for the event was Justin Mastores, also KAV Secretary, who did a sterling job keeping everyone entertained. Justin introduced MP Martin Foley, our local state member and adopted Kazzie, who was given an award of appreciation by president Nik for his support throughout the years, bestowing on him the title of “Honorary Kazzie”. Mr Foley reflected on the Kazzie cause and it is noteworthy that even on a Sunday, he has always been there to support the club over the past 10 years. It was also a privilege to have City of Port Phillip Lord Mayor, Bernadene Voss, in attendance who has provided invaluable support recently, in regards to zoning of our front building. 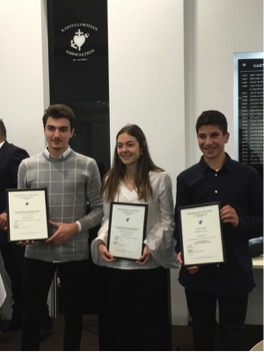 The KAV Young Achiever Award was presented to Sebastian Kritikides (father’s mother Irene Kritikides nee Paltos), who to his credit, started playing bag pipes at the age of 11. As a year 8 student at Scotch College, Sebastian has achieved great success in his musical endeavours. He is the youngest member of the ‘A’ Band at Scotch College and has competed in National competitions and events, the most recent being in Brisbane, where Scotch College were Australian winners. He is also the youngest person to be awarded the KAV Young Achiever Award. Sebastian also had the honour of performing together with Paul McCartney and Scotch College at Rod Laver Arena earlier this year. Those at the celebration were lucky enough to find out why. Sebastian spectacularly performed three pieces and received an overwhelming response and applause from the attendees. We wish Sebastian every success. It was a very stirring rendition.

VCE awards were awarded to Sophia Alexandra Davis (mother Tina Alexander), who attended Methodist Ladies College (MLC Kew) and received outstanding results and is now studying a Bachelor of Biomedicine at the University of Melbourne. Anthony Stabelos (grandmother Rosa Stabelos nee Atherinos) was the other VCE awards recipient. He had attended Mazenod College and is now studying a Bachelor of Applied Science (Construction Management) (Honours) at RMIT University, City. Anthony mentioned his love for Kastellorizo as “the best island”, no doubt something to do with amongst other things, his passion for spearfishing, snorkelling and his fishing successes there! The KAV wishes all award recipients and other young members, health, happiness and every future success.

Young and Senior contribute and have a say

The action did not stop here. An impressive and touching description of the history and lives of patron saints of Kastellorizo, St Constantine and Helen, was given by the great team and dynamic duo,ten-year-old Diana Spartels and eight-year-old Winnie Mastores. Diana is daughter of president Nik and Dina Spartels and granddaughter of Michael and Diane Spartels. Winnie is the daughter of Justin and Tahli Mastores, grandaughter of Christine Mastores.

In addition, a noteworthy and emotional speech by the much-loved Mrs Marika Bisas, who congratulated President Nik Spartels for the incredible hard work and effort he has put in to set a new trajectory for the club, something that the late ex-president Jack Bisas, together with other ex-presidents in the room would have been and are very proud of. Marika Bisas referred to President Nik Spartels as a ‘hero’ who has stepped up to help the cause at an important time in the Club’s history. Everyone who has seen how much time and effort Nik has dedicated to the challenges that have recently confronted the club, would agree.

There was a live ensemble band playing great dance music, a great vibe, incredible catering, including scrumptious salads, succulent meats and seafood and yummy desserts… and katoumaria!!! The food quality was fantastic. Were we at the Hilton or the Sofitel? With the great atmosphere, food and the crowd, it must be decades since we have seen people mingling and dancing at the Kazzie club to the rhythm of Greek tunes like that. Jacob Fronistas lead the way with a Kalamatiano that had me thinking, ” I wonder who Jacob’s Greek dance teacher is, I’d like to dance like that”. Well done Jacob for getting us all fired up and for your amazing efforts over the years with Frontitha Care, which we are all proud of and which continue.

Congratulations to Nik Spartels & Committee and all attendees for supporting

Everyone from the children to teenagers to families and seniors enjoyed the day. A major credit and thank you to Nik Spartels for his leadership, wife Dina Spartels and the events and general committee for the amount of work that went in to make this day a success. Thank you to all members and friends for your support. Perhaps this event will go down as one of the best St Constantine and Helen’s events ever and hopefully a sign of bigger and better things to come for the Kazzie club and its extended families, friends and members… a club that we aim to be… relevant to all ages, so that it endures and flourishes throughout the ages. 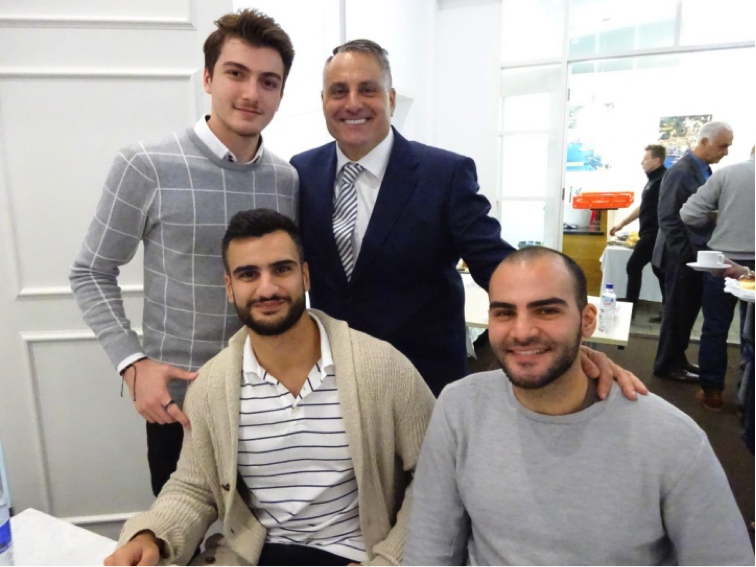