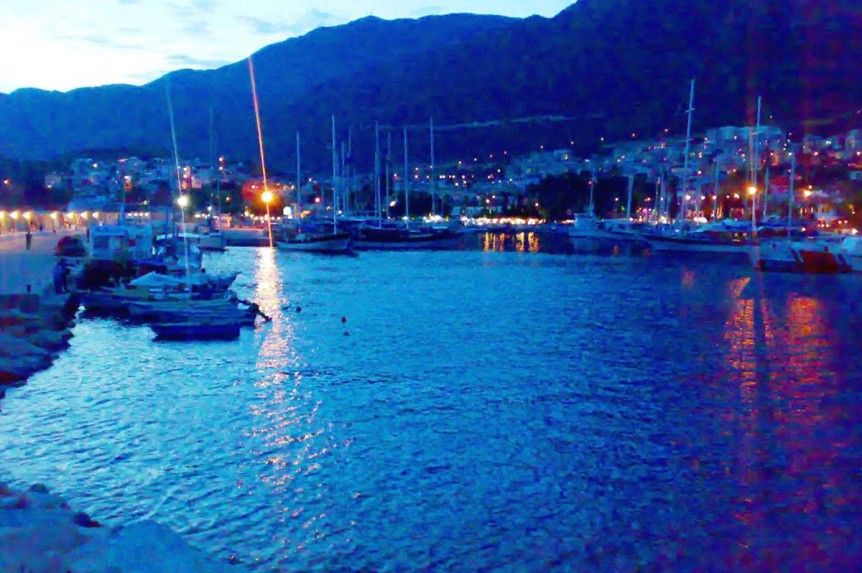 “Kastellorizo and Beyond”, by David Jeffrie

Foreword by Connie Gregory: David and Jill Jeffrie, from Melbourne, Victoria, spent a few months overseas in 2009 and David chronicled their trip to various locations. Their daughter Ellan is married to George Kailis, son of Jasmine (nee Harmanis) Kailis, and the late Desmond Kailis of Perth. They visited Kastellorizo because of their son-in-law’s connection to the island. This is an unbiased and entertaining view of Kastellorizo and beyond, by an Australian visitor. The “bride” referred to in the articles is David Jeffrie’s wife, Jill. This article was published first in the Megisti Messenger, the newsletter of the Castellorizian Association of WA Inc, in February 2010, and is reproduced here with the permission of the author.

Back on the ocean waves again heading back to Rodos, then on to the jewel of the Dodecanese, Kastellorizo, a seven hour trip. The good ferry Diagoras has far more facilities than we expected. Restaurants, self serve cafeterias, coffee lounges, escalators, bars, shops, double storey car parks downstairs & even dog kennels. We need to get out more.

Kastellorizo has a family connection for us, so as we were in the Dodecanese thought we would drop in. As one travel book divulges, there are two reasons for coming to Kastellorizo. One is to reclaim your grandparent’s house from the squatters, the other is you’re lost. Whilst another travel publication suggests that, “Kastellorizo is not the place to bring your Greek phrasebook, you just bring your Sheila”. Mmm. Many Australian flock back to the island during the northern summer. Chances are you’ll hear more A.F.L. & N.R.L. news being discussed than the Greek soccer scores. The island once boasted a population of over 10,000 around World War 1. It now has a permanent population of 250 Kassies, plus the army personnel based on the island.

As you arrive on the ferry the first thing that strikes you are the houses on the horseshoe shaped harbour. They appear to be a Hollywood film set, just facades & not real buildings. They all seem to be of the one design, a rectangular prism with a pitched roof. Our hostess Louisa, greeted us at the ferry docking, then jumped onto the ferry with her mother & two kids and headed back to Rhodes. School starts next week. Her uncle John, who owns a pub in Prahran, showed us to a very spacious apartment just behind St. George’s church near the waterfront.

The waterfront is just full of bars, restaurants, cafes & a few shops. A really active, busy area with lots of yachts moored in the harbour. The two/three storey houses on the waterfront have been tastefully restored in Mediterranean colours, but in the streets behind there is a mixture. Lots of rejuvenating & rebuilding of residences mingled in with half finished houses and houses in total ruin, possibly a result of mass emigration. It’s interesting to walk the labyrinth of alleyways only accessible by foot or moped.

Checked out the museum and then just made it to see the video in the old Turkish mosque about the history of the island. The video was insightful, informative & very moving. The bride got a bit teary. The island certainly has had a tragic history.

There are no beaches on the island, but plenty of places to swim in the harbour & off the rocks. Found a secluded spot to swim, with lots of schooners moored around and the Turkish coast away in the background. Beats work. Two hours later we wandered to the Mandraki or port, which is a small collection of houses surrounding a tiny inlet. Climbed up to the castle, which afforded magnificent views of the harbour & the town. Finished off the day’s touring, with a cold one at a taverna next to St. Constantine’s church, under the vines, surrounded by gum trees, with yia-ya snoozing in a chair in the kitchen inside and the local priest sharing a coffee with her daughters. Beautiful.

Day two started early in 36 degree heat. We headed around the island to the Blue Grotto. The opening was so low, that all in George’s boat needed to lay flat on the boat floor to make it in. The light coming up from underneath the water was amazing. Jumped overboard for a ten minute swim in this monstrous cavern. A great experience & all finished by 10 a.m.

Many of the locals and visitors just seemed to spend a large part of the day with coffee, drinks & food on the harbour talking. David is extremely lucky, as he has a world renowned expert with him on those. Checked emails & ‘coffeed’. It really is a unique place. Spent the arvo just meandering through the lanes looking at houses or what used to be houses & threatening cats. Heard that a prominent Perth businessman had just bought a block of dirt, with a view of the harbour for around $ 800,000. Fair bananas for a place where you can’t drink the water, there’s only one taxi & where most of the island barracks for Freo.

Dined at the Sydney Restaurant, where the owner spends six winter months in Sydney. Strange that. Asked him if there were any dim sims on the menu, he replied,” Maybe next summer”.

Loved our time in Kassie. Heard lots of stories before we came. Yeah, it’s a dot on the map & a bit out of the way, but it really was enjoyable. Glad we came.

George, the owner of the apartments, had us and a few others in his boat at eight sharp for the journey to Kas. Interestingly half way across the three km. stretch of water the Turkish flag was raised. Had a problem with our visa. The police in Kastellorizo had stamped our passports incorrectly & when we arrived in Kas a bloke who appeared to be a travel agent and not a man to be trifled with, asked to us to hand over 30 euro for Turkish visas, “no change, right money” came the demand & our passports. Told us to come back around five p.m. and all will be well. Which it was. We were not going to argue, had a head like a torn ugg boot.

Found the Hideaway Hotel and then headed off to the market, as our room was not ready. The market must have been placed in an old quarry, large rocks everywhere. Think a few of the stallholders turned up without popping their dentures in. The truancy rate at the primary school must have been through the roof too. Kids all over the place, chasing you with a lower price. Took lunch at the market. Some sort of savoury pancakes, eaten on a plastic kindergarten chair behind a stall. Jill chose a fresh pomegranate juice to wash it down with, squeezed on the spot. We’re sure the Food Handling Certification course, must be starting soon in Kas. Yuck.

The accommodation was excellent. The roof top terrace afforded some magnificent views all over Kas. Kastellorizo was only a stone’s throw away, another country. Technically another continent. The entire hotel was a great setup. The owners had covered every angle.

Kas is a town of 8000, with a main drag winding its way down a ravine to a very pleasant waterfront area. Lots of eat houses many nestled under shady trees, with streets turned into malls to cater for the tourists. The Municipal Tea Gardens near the harbour are delightful. Again Poms everywhere. Heard the next town up the road, Kalkan, is about to appoint a Pommie mayor. Just what we need, a Turkish test team.

The first tour we had a crack at was the Sunken City Tour, basically sailing around the island of Kekova. The bus trip to get to the boat took us through some very poor looking villages, a step back in time really. 90% of the trip was a swimming & barbequing job, with a quick look at the underwater city to conclude with. Good fun made more enjoyable with by the dozen or so maidens from Istanbul on holiday during Ramadan. All spoke some sort of English, lovely ladies. So much skin, so little material and some of the material didn’t stretch quite far enough either. The Aegean was warm & clear which made the dip in the water extremely enjoyable. The bloke in a tinnie selling Choc Wedges was also a plus. There was evidence of a settlement on the cliff face of the Underwater City & a couple of busted pots that you could just see in six metre of water. The Sunken City became a sunken city as a result of an earthquake during Lycian times. The Lycians are, sorry were, big around here a ‘squillion’ years back.

Another excursion we took was a short water taxi ride to a secluded cove for yet more swimming and tanning. Followed by laundry duties and a trip to the Lemonya Restaurant where if you buy a caffeine or beer you can uses their sun beds and swim yet again. There are no worthwhile beaches in Kas, but plenty of jetties and ladders leading into the saltwater.

Sunday night, we think was the end of Ramadan, and the place was full of people eating out & enjoying themselves.

The last outing in Kas was a trip to Saklikent Gorge some 60 kms north west of the town. Headed off in an open air Land Rover with a morning tea of Turkish coffee & grapes. The sides of the gorge were immense, must have been 100 metres straight up. Virtually no sun gets to the water at all. Walked a platform above the river water, then peeled down to the bathers before heading up stream with half of Mediterranean Turkey in hot pursuit. The only way to cross the river was holding hands, the current was that strong. Waded upstream to a thunderous waterfall. The only way you could stand under it was with a hard hat on. It was a difficult walk, but the locals, Ahmed & Mrs Ahmed were carrying babies, video cameras & off course the mobile. Headed back downstream where the guide asked was anyone interested in swimming the last 100 metres to the bridge. The river was a torrent, the bride & David covered the distance in 11.6 seconds with an audience on the platform above. The water was bloody FREEZING. Dined Turkish style on cushions on a pontoon over the river, before moving on to a mud bath. The bride looked gorgeous. Last stop was Xanthos, heaps of ruins, but the very place where Saint Nicholas went to school in the 4th. Century. Saint Nicholas is the gent who went into folklore as Santa Claus. He was born just down the road at Patara. This travel stuff is not all about sun & beer.

Had a special treat our last night in Kas. In the harbour right in front of the hotel was a magnificent two funnel steamer right out of an Agatha Christie novel. It was the ship Mustafa Kemal Ataturk, the founder of the modern Turkish republic, spent his final years.

Much of his final years we were to find out later, involved the partaking of raki, a potent alcoholic drink. He died with a crook liver in his late 50s.