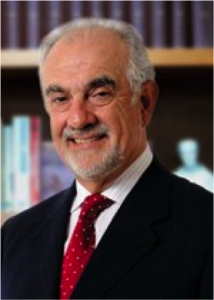 Mr George Pappas is the Chancellor of Victoria University. In arriving at the Chancellorship he brought with him an extensive curriculum vitae, and we have pleasure in presenting his personal details and highlights of his career.

George Pappas was born in Rhodes, Greece, officially on 11th June 1946. However his actual birthday is celebrated on June 17th. His parents were Stamati Papageorgiou and Panayiota (nee Voyage – daughter of George Boyatzis and Maria Lacherdis). Stamati (known in Australia as Stan) came to Australia in 1950 to prepare a home for his wife, (known as Betty) and sons Georgos and Dimitrios (George and Jim) who migrated in 1952, arriving in Melbourne. Younger brother Christos (Chris) was born in Australia.

The family lived in the south east of Melbourne, moving many times, originally from Black Rock, to East Brighton, Malvern and eventually Glenhuntly. Stan found work in his trade of tailoring, and also worked as maitre d’hôtel in a restaurant, the Troika.

George attended several schools finishing his early years at Spring Road Central School, before winning a place at the Melbourne High School. In his matriculation year (1963) George was awarded the Exhibitions (top student in the State of Victoria) in both Economics and British History, together with a General Exhibition, Senior Government and Monash University Scholarships.

At the completion of his studies he was employed as Associate to Sir Richard Kirby, President of the Conciliation and Arbitration Commission (1968 – 1969).

In 1969 he was awarded a Frank Knox Memorial Scholarship to study at Harvard University, and he was admitted into the Master of Business Administration program, graduating in the Class of 1971 with Distinction. While at Business School, George was Vice President of the Students Association.

In 1971 George began working with the Boston Consulting Group (BCG) in Boston, moving to Tokyo in 1973, then to San Francisco in 1976. Due to family circumstances (the ill- health of his mother), George returned to Australia in 1976 with BCG, but decided to leave the firm so the family could stay in Australia.

He formed George Pappas and Associates in 1977 to compete in the Australian strategic management consulting industry, then in its infancy, and then dominated by the American based McKinsey and Company. He joined with his former class mate at Harvard, Colin Carter, to form Pappas Carter and Company, and then two other Sydney based colleagues Ralph Evans and Maurie Koop, joined the partnership to form Pappas Carter Evans and Koop (PCEK) in 1979.

After many successful years, in terms of growth and reputation in the Australian business community, PCEK was merged with the world-wide Boston Consulting Group in 1990, and George worked with the expanded company until 2002 as a senior consultant (Vice President), head of the Australian and New Zealand arm, and also as a world practice leader (Travel and Tourism, which he co-founded), and he served on the international Executive Committee. After his retirement he continued in the role of Senior Advisor to the company.

In 2003 George accepted a role as Under Secretary in the Department of Premier and Cabinet, Victorian State Government, and served in that capacity until 2005.

In 2004 George became Chairman of the Committee for Melbourne, an organisation promoting discussion and active policy formation with the goal of enhancing Melbourne as a place to live and do business. He held that position until 2013. Businesses, educational institutions and government bodies are members of the Committee, and their leaders participate in the many activities of the group.

Between May 2008 and March 2009, he chaired the Defence Budget Audit Committee for the Federal Department of Defence, and continued his involvement through the implementation phase as Chair of the Defence Strategic Reform Advisory Board (October 2009 – October 2012).

From 2006 until 2009, George Chaired the Advisory Board of the Monash Institute of Medical Research. He was awarded the Monash University Distinguished Alumni Service Award in 2009.

Other:
2000 to 2013, Board of the Western Bulldogs Football Club
2005 to 2010 Commodore of the Point Leo Boat Club
1980s Preshil School Council, Hon Treasurer
Chairman, Georges Ltd
An interest in mentoring young people in business has been a continuing activity for George, both at PCEK and BCG. He has been involved with the Ray Willis Leadership Program at Melbourne High School for many years, and has offered ongoing extensive advice to young entrepreneurs.

In accepting the award which was presented at the 90th Anniversary Gala Dinner Dance in October, 2015, Mr Pappas announced that he would endow a scholarship of $5,000 to a student of Kastellorizian descent, entering the first year of tertiary education. (More photos under Gala Dinner Dance).

We celebrate this distinguished Kastellorizian.

In the Australia Day Honours list in January 2016, George Pappas was appointed an Officer of the Order of Australia (AO), for distinguished service to the community through roles with tertiary education, medical research and defence organisations, and to business, particularly management consulting.