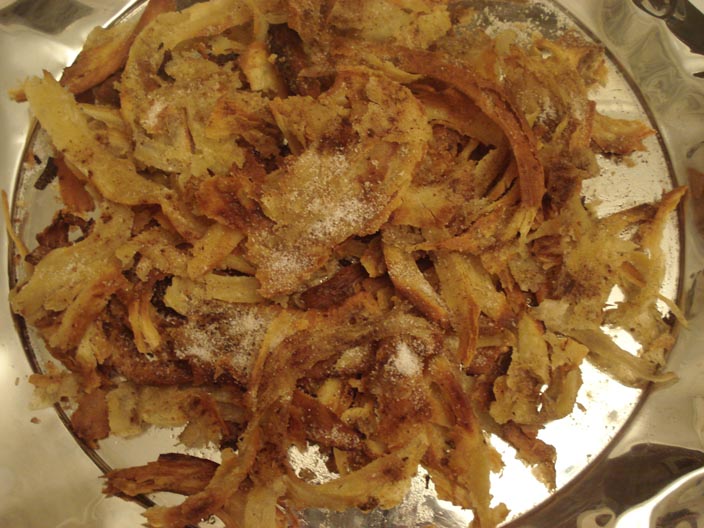 If you are of Kastellorizian descent and have never tasted Katoumaria, one of the great sweets of Kastellorizo, you are seriously deprived.  It is to die for!  It is a fried pastry dish, rich in butter and spices, made for any happy occasion, or when the fancy takes you.  I learnt to make it from my late mother-in-law Eftihia Gregory (nee Palassis) who was widely acknowledged as an outstanding cook.   It is presented at table on a large platter and everybody takes some to their plates and eats with their fingers.  It disappears in minutes.

Katoumari, the Queen of Kastellorizian sweets, and the Turkish Katmer have a common origin.  It is recorded that the cuisine of the ancient Orghuz Turkic tribes included, amongst other things,  yahni (stew), yufka (flattened bred), chorek (ring-shaped buns), and katmer (layered pastry). Katmer can be salty or sweet depending on its filling.  The use of layered dough is rooted in the nomadic character of early Central Asian Turks and a rod-styled rolling pin, the oklava, was used.  I also found that the Urla district of Izmir (Smyrna) inTurkeyis still famous for its Katmer.  If you are interested in this historical information, go to Wikipedia and type in “katmer”.

I corresponded with Yelda Gokdag, a Turkish cook inSwitzerlandwho has a culinary website.  She said that modern Katmer is a type of pastry, made of yufka (thin sheets of dough, i.e. phyllo dough). Sugar, butter, cream and pistachios are added, and folded in. Then cooked in a pan with a little bit of butter. She was not familiar with the description of  Katoumari.

According to Yelda, the Turkish Katmer often has a savoury or sweet filling, so it seems that the Kastellorizians put their own stamp on this fried pastry to create the mouth-watering butter-soaked and spiced Katoumari that we know today.  It is also made the same way in parts ofCyprus.  Various types of fried pastry exist throughout the Middle East,Asia Minorand beyond.

At the Kastellorizian Association of Victoria Clubrooms in September last year, Evelyn Salvaris and myself demonstrated how to make it because everyone likes to eat it, but young people, and often their parents, don’t know how to make it.  Food is an excellent way to keep young people interested in their heritage and the demonstration was a huge success accompanied by lots of enthusiastic advice. Huge amounts of Katoumari were devoured to much acclaim.

The following detailed recipe will guide you to making perfect katoumaria, or better still, if you have somebody in your family who still makes it, ask to go and watch them make it and pay careful attention to the method.

Place flour in bowl, add mixed liquid (water, oil and vinegar) stir with a wooden spoon to combine and then knead for five minutes.  Turn out on bench and knead for a further 5-10 minutes on floured surface until pliable and non-sticky.  Rest for a while in the fridge.  Divide into four portions. Roll out one portion until quite thin, (a long piece of dowelling does a better job than a rolling pin), keeping a circular shape. Brush liberally with melted, but not hot, butter.  Let stand a few minutes. Make a hole in the centre and roll the dough back on itself, forming a long rope, and then cut the rope.  Run hands along rope and squeeze gently. Coil both ends until they meet, butter one coil and twist it on top of the other and then roll out to a little less than the size of the frypan. (I use a large Tefal pan).  Place generous amount of butter in heated pan.  Cook katoumari slowly for about 20 minutes each side until golden brown. Remove and sprinkle with sugar and spices. Break up to serve, adding a liberal dose of sugar and spices. Place on a large platter.  Discard butter in pan before frying the next one. Or, have two pans going at once!

Notes: Four is a lot of Katoumaria – so divide recipe to make two.  Can be fried and frozen whole, wrapped in foil and then in a freezer bag. .  Can be reheated by several methods, e.g. zap quickly in microwave and then refry before breaking up, or reheated whole or broken up in the oven before adding sugar and spices.   Dough can be made up to a day ahead, wrapped in oiled clingfilm and refrigerated. 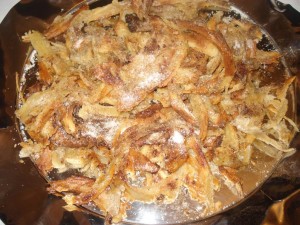