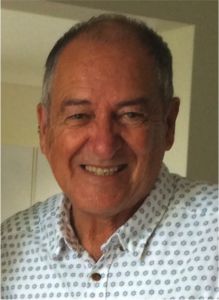 Perth Genealogist is Kastellorizian of the Year 2016

Visit our Gallery for photographs from the award presentation dinner at Yianni’s Tavern, Kew, on 8th October 2016. (Coming soon).

The President of the KAV, Dr Nick Lolatgis, said that: “Allan Cresswell’s achievements in the field of genealogy are awe-inspiring. He is a household name throughout Australia for those who are descendants of Kastellorizians.”

“He has reinforced in many people a genuine pride in knowing ‘who we are’ and has inspired not only the older generation, but also the younger generation to seek out more information on their background and take pride in their heritage,” said Dr Lolatgis.

Allan Cresswell has been active in genealogy for thirty years, and over the last nine years has concentrated on building up the free Castellorizo Family History website http://www.castellorizo.org He currently works almost full time on the website, as well as being active officially within the Kastellorizian community in Perth – most recently as current President of the Castellorizian Association of WA (for three years to date), and prior to that served as Vice President for six years.

He was inspired to create the website when researching his own Kastellorizian roots in honour of his mother Cynthia Cresswell (nee Karasavas), who was born in 1923 on Kastellorizo to Agapitos Spiro Karasavas and Anastasia (nee Xanthis).   In addition to the website he has created a “Castellorizian genealogy” Facebook site, produced several videos and is very active in promoting family history and all things Kastellorizian.

Not satisfied with submitted data he checks and double-checks official records wherever possible: births, deaths, marriages, (databases purchased at his own expense) cemetery records, ship arrivals and other data, and constantly looks at more creative ways to record the family history of Kastellorizians. He has collated an extensive media library to accompany his entries, and produced videos. He has visited every mainland state of Australia to collect data and photographs, much at his own expense.

“Anybody who accesses the site is absolutely amazed at the wealth and depth of information and associated documents. Allan has always made himself available, free of charge, to anyone requiring information and assistance in their endeavours to either research their family history or to preserve whatever information they have already amassed,” said Dr Lolatgis.

All information and media on the website has been manually entered by Allan Cresswell over nine years. (Statistics grow daily).

In this age of technology where so much information, not always substantiated, is available on the net, Allan’s genealogy website is a very much trusted resource, and incredibly detailed and easily accessible.

The enormity of the task that Allan set for himself when he started the website, and his determination to carry it through to what it is today, is a remarkable, excellent, and honourable achievement. It is a true inspiration to all in that anything is possible if you truly commit to it. He has made a selfless and outstanding contribution to the Kastellorizian community/Diaspora, not only through his genealogy website and associated genealogical activities, but through his commitment to the Kastellorizian community. For example –

Allan Cresswell was born in Nedlands, WA, on 19 November 1943, to Cynthia Pamela (Karasavas) and Ronald Wallace Cresswell. He was baptised Agapitos Ronald Cresswell. He married Jean Mary (nee Marshall) in 1966 and they have five adult children and five surviving grandchildren. He and his wife have now retired to Quinns rocks, WA.

Allan had a long, varied, and unblemished, career as a Police Officer and received a Commendation Award in 1998 whilst working with the Bureau of Criminal Intelligence. In his later years he moved to administration including strategic planning. Following his retirement from the Police Force, he was employed by the Justice Department of WA (2007-2012) often supervising the jury at high-level trials.

He also has an ongoing involvement with the Borneo POW Relatives Group of WA, holding several positions, including president, and since 2006 has continued in the role of Research and Liaison Officer.